I got emailed the other day by Jon Esparza, a real nice guy and big Kids Love Comics fan (in fact, I quite remember having a big long chat about Don Martin with him at the last San Diego Comic Con)

Anyway, he's an aspiring cartoonist, dancing the 'how do I get people to notice my work?' dance that so many of us go through, and so I thought I'd share a few of them with all you whoever you are that read this blog! See?!? Never underestimate the power of asking people nicely to do things for you. Just don't over estimate it either. 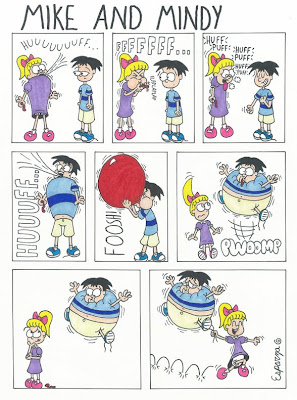 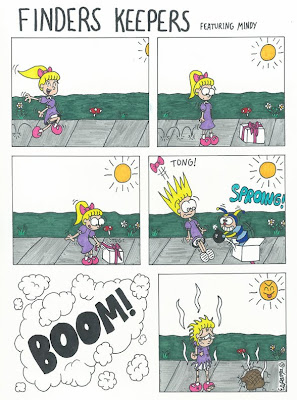 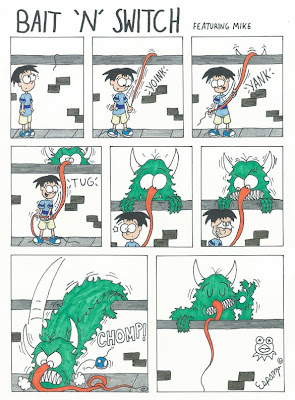 Best of luck to you Jon!

What are the rest of you peoples up to, huh? Cuz I dunno...

Well, apparently the Baltimore ComicCon is this weekend. I won't be going, indeed, have never been, but I hear it's great, and I know KLC has a big honkin booth, so everybody have a baltimoretastic time, and post some groovy photos upon your return! Back East Kids Comics Fans: GO! Buy Books, have fun times, or else.

Just thought I'd remindify everybody here who's coming to the San Diego Comic Con (in justa few days! So much stuff to do to get ready! Augh!) to come and visit us Kids Love Comickers! (Does any one else think we need a snappier nickname? Post comments suggesting clever ones, we'd love to hear.) Me, (Ray Friesen), and Jimmmy Gownley (Jimmy Gownley) are going to be sharing a booth and poking each other at #2207. Scott Christian Sava is going to be at booth 2002. You can remember them easily, since they both have two 2's in them. Also, Scotts booth, if it were a year, is the past, while Jimmy and mine are the FUTURE WOO. John Gallagher's gonna be floating around, but I don't think he's anywhere in particular. Anybody else gonna be there? I dunno. 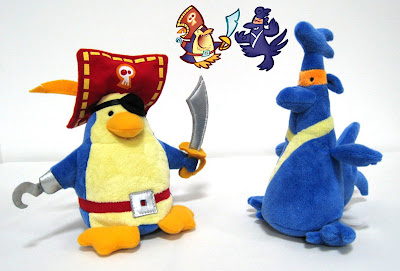 Not too shamelessly plug myself TOOO much (just enough actually) but have you been reading their weekly adventures on my website? www.DontEatAnyBugs.com You totally should, they're hilarical. And I'm not just saying that because I'm incredibly biased.

Our special deal is, for every 100 plush toys you buy, you get another half of one for free. Such a bargain! I can personally vouch for the fact that they are LOTS of fun to play with. In fact, I'm playing with one right now. Using the tip of Pirate Penguin's sword to type thisasdj klajsdjk kjajkliowe jfh .

Oh, and Jimmy's gonna be giving out Solid Gold Poodles to everybody who votes for him to win the Eisner award. He's got a big pile of them, so feel free to nag him into giving you one, even if he pretends to have no idea what you're talking about. It will certainly be a lot of fun for me to watch! Check out his newly redesigned website, www.AmeliaRules.com, it's got all sorts of really exciting new features. Heck, just check out everybody's website, whydontcha?

After I get back, and accumulate some more free time, stay tuned for all ages friendly comic reviews and news and previews and special doodles and all sortsa cool junk!

How is ya? Happy 4th of July weekend! I am lounging around a hotel at the moment, having taken my sister and her friends to the Anime Expo in LA. I have lots of time to get caught up on emails and web things, seeing as how I left all the other work I was supposed to be working on at home. I bleev I have gotten food poisoning though, I feel not at all well, and so am not enjoying it as much as I coulda shoulda.

I am perscribing myself lots of chocolate.

the Heroes Comic Book Convention was in North Carolina last week, and me and a buncha other KLCers were there, so I figured I'd talk about it!

I forgot to take any pictues, indeed, forgot my camera, so if anybody has any snaps of us looking googly, feel free to upload. Actuall, here's one sent to me by the awesomecooltastic Emileeeeeeeeeee, super KLC fan: 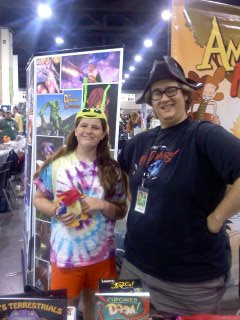 4anda1/2 members of Kids Love Comics were at the Show, Jimmy Gownley, Scott Christian Sava (Whom I had never met in person before, an excellent nice guy -- not that Jimmy isn't nice, it's just my allready knowing him that precludes him from being complimented.) Harold Bucholdz, KLC cofounder, and author of Apathy Kat, Lovable old me, and the 1/2th member, Dave McDonald, author of Hamster Sam! Dave and Jimmy went to separate schools together. He's not an official member, mostly because John Gallagher hasn't updated the website to include him yet, which is part of the KLC hazing process. John himself, as well as Josh Elder weren't at the show, but that's okay, because we replaced them with a giant inflatable penguin I just happened to have.

The show itself was very comic book showy, only more so. Very well organized and delightfully executed, the show runners should be proud. Certainly wish I was close enough to drive there rather than fly, but that's the gripe about all shows that are far away from you! I had a lovely time, even if I missed going to all the cool parties by dint of not being able to find them. Sigh. I try to be a social butterfly, but I'm not very good at it.

I did go out to dinner with everybody, including Jimmy's Librarian friend Snow, so that was totally fun. We stayed up way too late talking about *GASP* comic books. I had fun putting my foot in my mouth, and Jimmy said some things that caused us to question his wife Karen's sanity in marrying him. Everyone else was well behaved.

I would like to point out that, being a california boy, I am well used to Heat, that Humidity is just a terrible terrible design flaw, and I would like it stricken from the record. Everyone else was used to the back east humitude, and thought I was a total lightweight, but UGH.

I met a buncha other cool peops at the show, and will be doing some sort of link roundup when I can summon the wherewithall. I've typed rather alot of things now, and am going to stop right... NOW.

Next KLC Stop, COMICCON! Me and Jimmy are sharing a booth, and have promised not to kill each other. Although I'm pretty sure Jimmy had his fingers crossed, which is just a well, since I'm a liar and my promises are invalid.

Come and see us at these two shows!

Well, at this Michigan one, it's just me, But EVERYBODY pretty much will be at Heroes! If you live anywhere nearby and DON't come and visit, we will cry.