In a related announcement, show organizers note that one of Williams’ first initiatives is the launch of Kids’ Day, a significant all-day program on Sunday, April 20 which will focus on events and activities designed to attract and entertain young fans. A key partner in the development of this program is Kids Love Comics (KLC), a nonprofit organization dedicated to the development and growth of children’s comic books in North America.

“We are extremely fortunate to have someone like Jay to step to the plate,” notes Greg Topalian, Show Director for the Con. “Our kids’ stuff is only one small part, though a very important part, of a comprehensive schedule of approximately 125 special events that we’ll be offering, including author activities and conversations, screenings and premiers, and many panel discussions,” Topalian concludes. “As always, our goal is to provide something challenging, entertaining and educational for everyone who attends New York Comic Con.”

We at Kids Love Comics are very excited about this news, and can't wait to share updated info about the programming! Check back here for new information, as it happens! See you in New York in April! 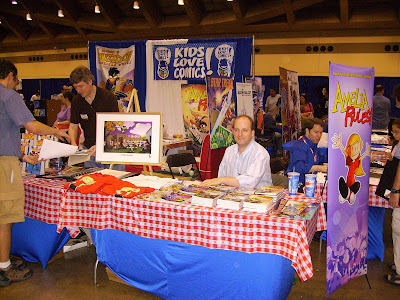 Well, it's been over a week since the Baltimore Comic-Con wrapped up, and we at Kids Love Comics are only just now catching our collective breath! The Comic Book Diner was a huge hit, and the free posters we had were flying off the tables! In all, we had 15 all-ages creators at the Diner, and folks were clamoring to have each and every one of us sign their posters! The coloring stations for kids were extremely active throughout the two day show, and kids of all ages, crayons flying, were creating new drawings by the minute! Many of the creators at the Comic Book Diner remarked that they'd never had so many kids visit their booths before, with KLC proving once again that kids really DO love comics! All in all, it was an outstanding weekend, both in terms of outreach to kids and families, as well as sales of the all-ages material we all had at our tables.

In addition, many of the CBD participants and friends attended KLC-sponsored panels for kids. On Saturday, KLC co-founder Jimmy Gownley (Amelia Rules!) and John Gallagher (Buzzboy) hosted a panel called "Kids Love Comics. Why Don't Comics Love Kids?" In it, they discussed the general industry trend of comics getting away from kid-oriented material, and what Kids Love Comics is doing to reverse that trend.

On Sunday, Rich Faber moderated the "Kids Love Comics" panel, featuring an interactive session of creating comics. Panelists were Art Baltazar and Franco Aureliani of Patrick the Wolf Boy fame, and the brand new Tiny Titans from DC's all-ages Johnny DC imprint, as well as their super-enthusiastic editor, Jann Jones and their pal, Jamie Cosley; Jamar Nicholas of Tokyopop's Grosse Adventures; Thom Zahler of Love and Capes; and Mark McKenna, whose Banana Tail is a favorite of kids as well as Kids Love Comics. Kids and parents who attended the panel were treated to lessons on how a comic book is created from some of today's best all-ages creators, and were thrilled to be able to work with those creators to make their own comics and characters. All in all, it was a fun time for everyone involved!

Here are some pictures to hold you over until next year's show. We hope we'll see you there! 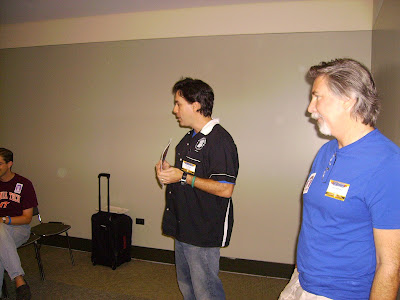 John Gallagher introduces the panel, as Mark McKenna looks on. 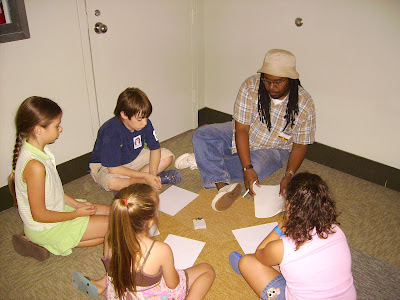 Jamar Nicholas teaches his new pals how to lay out the borders on a comics page. 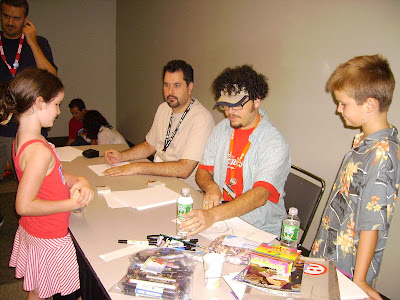 "Aw, yeah man!" Art Baltazar and Franco Aureliani show the kids how to create characters, as Jamie Cosley looks on. 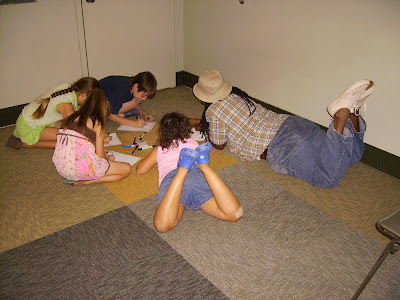 Jamar got right into it with the kids! 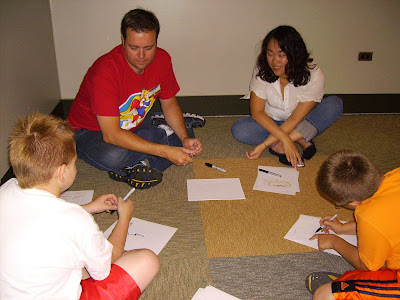 Thom Zahler teaches the finer points of lettering and sound effects to Jann and the kids. 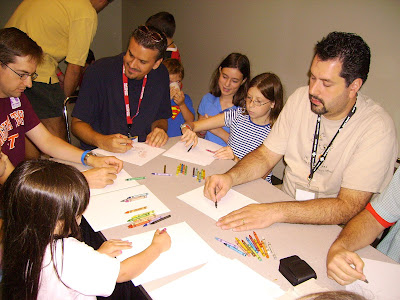 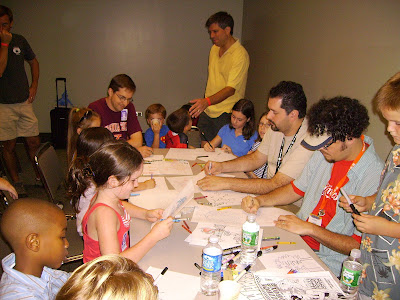 Even parents were getting into the act! Parents Love Comics too! 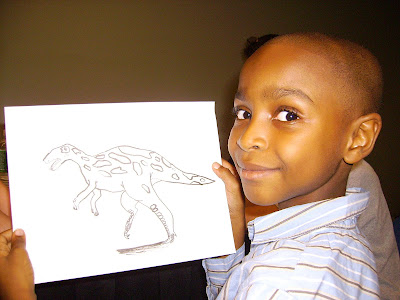 This young man is destined for museum work! Excellent dinosaur! 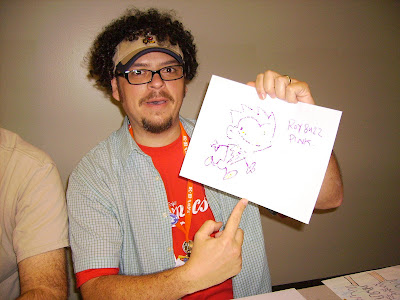 Art attempts to add to the Sky-Dog pantheon of characters with this entry... Roy Buzz Pink! Art will soon be hearing from Gallagher's attorney! 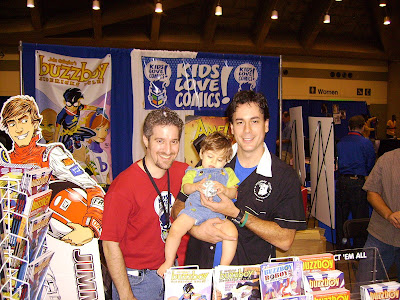 Rich Faber and John Gallagher show that even Babies Love Comics (and baseballs)!

Well, that's it for now. See you all soon! 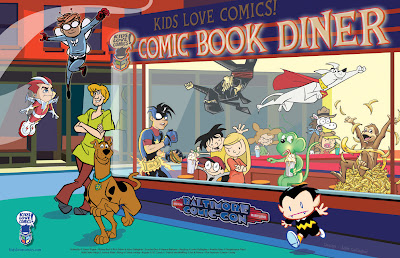 
Baltimore Comic-Con is recognized as a star-studded, family-friendly show; one of the few major conventions still focused primarily on comics. Kids Love Comics is a non-profit organization made up of comic creators, publishers, fans, educators and journalists, as well as those involved in the marketing, promotion, distribution, and retail end of the comic book medium. Together the Baltimore Comic-Con and KLC have formed the Comic Book Diner, an all-ages comics pavilion, offering up comics that are cool for all kids, from age 6 to sixty!


KLC will be presenting panels on the subject of the kids comics industry, as well as a special Sunday HowYaGonna comics tutorial session, with cool stations designed for kids and parents to learn how to create comic books. Comic Book Diner creators will be on hand to give personalized instruction in the process of creating a comic book, from initial ideas through completion. Also, a unique Comic Book Diner print featuring all of the Comic Book Diner creators' characters will be available for fans to have signed. Baltimore Comic-Con promoter Marc Nathan has been working with local libraries, as well as the Baltimore County Boy Scouts to make sure the Sunday panel is well attended, even offering up free admission to kids with a paying adult (Sunday Only).

"This is a great way to showcase the large variety of kids comics available," said Comic Book Diner organizer John Gallagher, whose own Buzzboy will be a part of the Comic Book Diner. "Marc Nathan has always supported kids comics, and when he offered us the opportunity to create an entire section at the Baltimore Comic-Con specifically devoted to kids, we jumped at the chance! Oh, and I almost forgot... we'll have an actual diner booth set up too!

There are plans for the Comic Book Diner to hit many of next year's comic shows, including the New York Comic Con, Charlotte's Heroes Con, San Diego's Comic-Con International, and of course, back to Baltimore for next year's Baltimore Comic-Con. But first, we'll save a seat for you this weekend, at the 'Diner!! 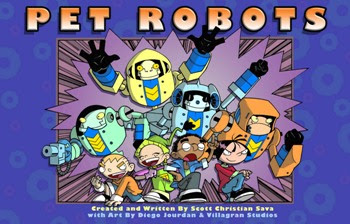 We'll have more Comic-Con/ Kids Love Comics News and pics soon, but here's some breaking excitement: Scott Sava, KLC friend and super cool creator of Dreamland Chronicles, The Lab, and Ed;'s Terrestrials, has announced that his latest project had been optioned by Disney-- way to go Scott!

While KLC's mission is to promote literacy through comics and GN's, it is always cool to see the valodation of how all-ages comics canb transition to other mediums.

Posted by John Gallagher at 7:37 AM 1 comments 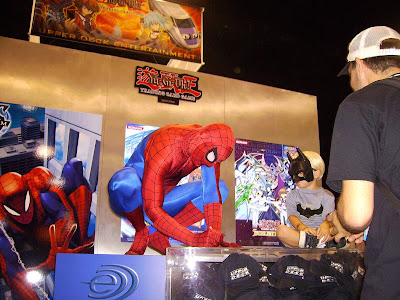 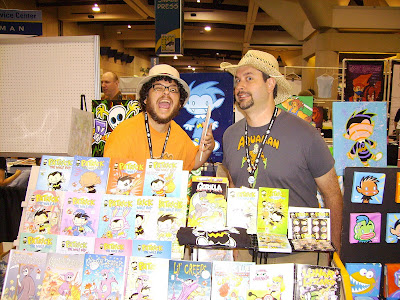 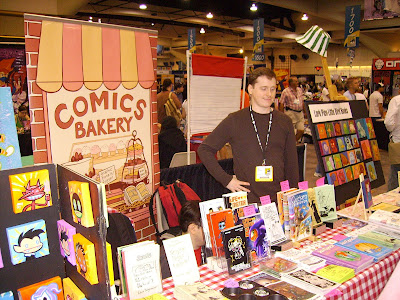 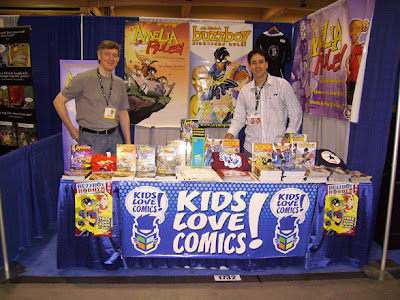 It's been a very busy Comic-Con for all of us at Kids Love Comics, from speaking with fans, talking with entertainment companies, and prepping up for the year ahead, as KLC really gets rolling. It has been great seeing all the all-ages creators out here at the show-- we've even been considering a giant KLC booth for next year.

Here's some more quick picks for your amusement:

Posted by John Gallagher at 8:07 AM 0 comments 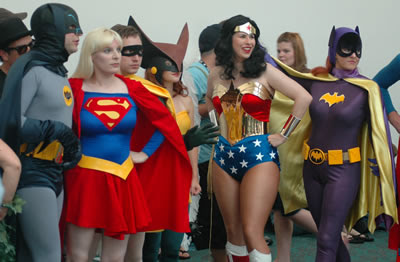 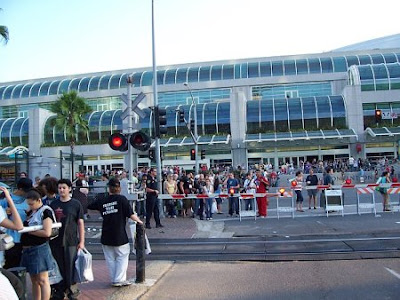 KLC is set up at Booth 1732, with creators Jimmy Gownley (Amelia Rules), Josh Elder (Mail Order Ninja), John Gallagher (Buzzboy), and Rich Faber (Roboy Red). If you are in San Diego, come by and say hi! We will be handing out posters, signing copies of our books, and handing out the KLC reccomended reading list, featuring cool graphic novels every kid will love!

Meanwhile here are some pics, courtesy of the many sirtes out there promoting the show!

Posted by John Gallagher at 9:21 AM 2 comments 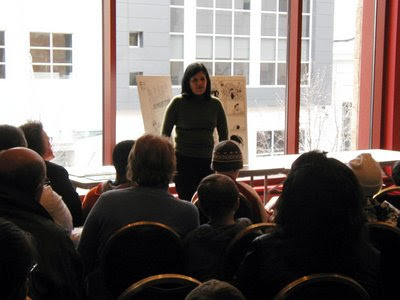 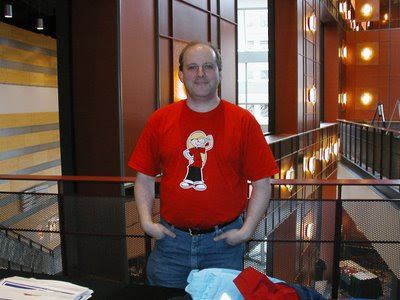 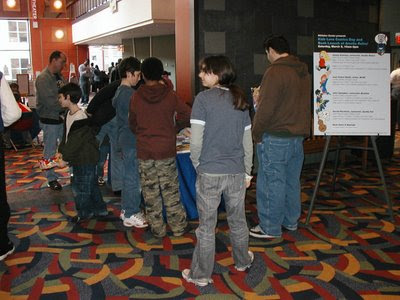 Since many of you may hjave stumbled upon KLC trhrough the blogosphere, I am taking it upon myself to link up to some early grass roots efforts to get kids reading (and creating) comics and graphic novels.

Organized by Jim Gownley and the Whitaker Center of Harrisbutg, PA, and with some support by Diamond Books, the KLC crew joined together one Saturday in March to share insights into the fun and creation of comics, as described by Rich Watson at the Blog@Newsarama - ...

And here's a report by KLC friend Chris Mautner at Panels and Pixels (where I swiped afew of these pics-- thx Chris!)..

Posted by John Gallagher at 7:30 AM 0 comments

Kids Love Comics Heads to ALA! 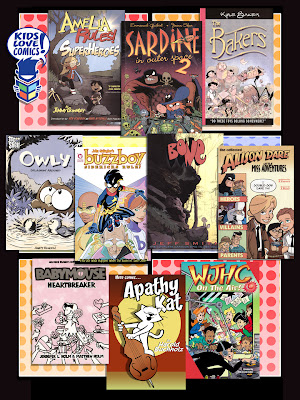 This weekend, members of Kids Love Comics, including Jimmy Gownley (Amelia Rules!) and John Gallagher (Buzzboy) will be attending the American Library Association conference in Washington DC! Please visit us at Booth 2467, part of the Diamond Book Distributors Pavillion.

There will be signings, FREE GN samples, and KLC will be handing out the newly published KLC reccommended reading list sheet-- a must for any librarian or educator starting or expanding a kids graphic novel section in their library or classroom.

We hope to see you there!

Posted by John Gallagher at 10:09 AM 0 comments