New All Ages Humor: Another Dirt Sandwich by Ray Friesen

This is my first official post since becoming a team member of the KLC blog (Kids Love Comics having graciously let me insinuate myself into the group a few months ago anyway) So I thought I should introduce myself and shamelessly plug my work!

My name is Ray Friesen, I'm a cartoonist living in California. A few years ago, I was nominated for the Ignatz Award for Most Promising New Talent. I have delightfully poofy hair, a flamboyant taste in hats, and am fond of drawing penquins.

I have 3 published graphic-novels-of-the-humorous-persuasion: "A Cheese Related Mishap", "YARG!" and my latest and greatest, "Another Dirt Sandwich" which, by a strange coincedence, is available in this month's Previews catalog (Page 293, publisher Don't Eat Any Bugs Productions, order # Feb083715 in case you were wondering.) It got one of those cool 'kid friendly' icons, which I didn't even know they had....

Here is my shpiel for 'Dirt': 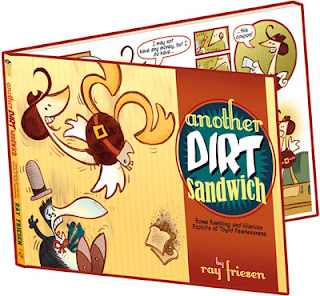 ANOTHER DIRT SANDWICH
Some Rambling & Hilarious Exploits of Tbyrd Fearlessness

Feeling a bit peckish? Try Another Dirt Sandwich! It's a graphic novel of the humorous persuasion with all the fixin's: Swindling! Mustard! Birds wearing hats! It's just chock full of cartoony goodness. A must read for kids and kids at heart. If you like silly, then giggling is guaranteed.

This book chronicles the ramblings adventures of inept ostrich con-man Tbyrd Fearlessness, and his gullible rube-turned-sidekick Hopalong Cassowary in their search for fame and fortune, or at least lunch.

If you eat only one book this year, make it this one. Chomp. Mmm! You can barely taste the gravel.

Here are some nice things people said about me:

"...Friesen’s humor tends toward younger readers, while his language and ideas seem better suited to a more sophisticated audience. The art, however, ranges so widely (from digital Claymation to outright cartoons) that the pages remain visually engaging throughout, and the humor comes at a furious pace, with sometimes four of five jokes crammed into a single panel. Lots to look at here."
-- Jesse Karp, American Library Association Booklist


"Gr 5-8–The most impressive thing about this book is the author, who started his cartoon career at age 12 and is now 17. The comic follows the zany adventures of two young teens and a penguin as they race to save exploding cheese from chicken ninjas. ... it is a worthy effort from a young writer who obviously has a bright future."
--Scott La Counte, School Library Journal

"One of the first things you’ll notice about RQW is that there isn’t so much of plot, as an extended ramble. It’s sort of like those jokes that meander on and on with no signs of ending for a solid ten minutes… except that unlike most of those jokes, RQW is funny, and quite frequently at that. Plot twists happen at the drop of a hat, as do random shopping expeditions, goofy jokes, and shifts of location. It works, I think, because Friesen doesn’t seem to ever take RQW seriously. He may or may not be making it up by the seat of his pants, but he certainly does his best to give you that impression. As each non-sequitur shows up, it’s more over the top and bizarre than the one before, and it’s hard to keep from laughing. Each cliffhanger is resolved in a humorous way rather than trying to fit in strange plot twists, and that really sums up the entire book—humor over plot. We’re starting to see more all-ages adventure books hit the market these days, but RQW is definitely the silliest."
--Greg McElhatton, iComics.com


Well, that's about it really. All the pertinent tidbits anyway. Thanks for letting my ramble. You can read the first chapter of all my books, and my free weekly strip on my webular site, www.DontEatAnyBugs.com