Jimmy Gownley's award winning character, Amelia McBride has her own new Website, complete with games, an Amelia podcast, and a slew of other cool features!

You can even play a nifty "Whack-A-Mole" type game, but with none other than Amelia Rules characters Pajamaman and one of the dreaded Ninja kids from across the neighborhood!
Visit the Amelia Rules Website! Also on the site is mention of the Scholastic version of Amelia Rules-- a lot of All-Ages Comics for just 5 bucks!

Posted by John Gallagher at 8:21 AM 2 comments

Dean Trippe is the super talented creator of Butterfly, the story of a sidekick of....well, another sidekick! The stories range from super heroic to simple slice of life strips, with masks included!
Check it out at Lunchbox Funnies! 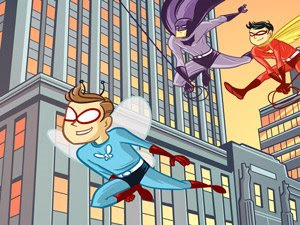 Create your own comic book pages with art from AMULET Book One! 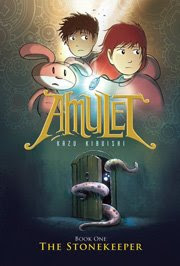 Amulet is a fine new all-ages GN by Flight's own Kazu Kibuishi, and you should check out this story, which I find on par with Harry Potter in complexity and excitement...

After a family tragedy, Emily, Navin, and their mother move to an old ancestral home to start a new life. On the family's very first night in the mysterious house, a strange noise lures them into the basement where Em and Navin witness their mom's kidnapping by a humongous, tentacled creature who drags her down behind the basement door. The kids give chase down a twisty spiral stairway and find themselves in a world filled with shadowy enemies and unlikely friends.

Kazu Kibuishi is the editor of the popular Flight comics anthologies, as well as the creator of Daisy Kutter, a YALSA Best Book for Young Adults. He lives in Alhambra, California.
You can visit the amulaet site and create your own comic!
Download the first 16 pages here!

Some cool all ages titles from the big guys! 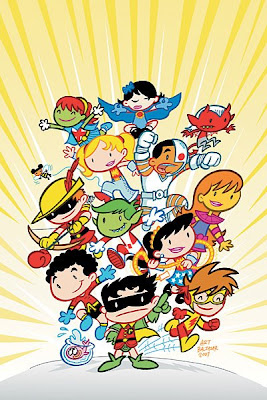 We at KLC ofte 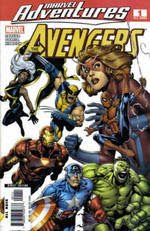 n focus on those undiscovered gems in all-ages publishing, but there are some very good titles that deserve attention-- most notably Marvel's "Adventures line, and DC's Johnny DC titles-- especially the Teen Titans-centric titles of Teen Titans go! and Tiny Titans!

Marvel's Spider-Man book is great, but it is the Marvel Adventures Avengers (say that 3 times fast!) that really shines, especially when written by Jeff Parker!

Posted by John Gallagher at 9:32 AM 0 comments