Cupcakes of Doom and other nonsense

It hasn't been very lively around this blog lately, and as 1 of 5 contributors, that's 20% my fault!!!

So lets see, what should I talk about?

Well, first up, to be all self promotiony, I have a new book out! Cupcakes of Doom: 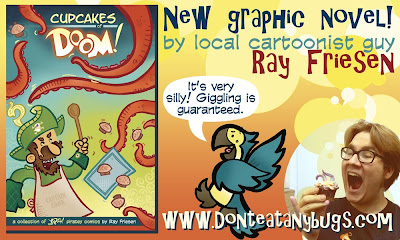 and here are some nice words from the American Library Association:
The cookie-loving pirates from previousYARG! efforts return as the featured players in this unrelentingly pun- and gag-filled adventure. Escaping from a desert island, the pirates tackle everything from the justice system and going into business to relationships and dealing with mothers (all in an age-appropriate fashion, of course) as they trade blows and jokes with a bunch of rather hoity-toity Vikings. The point here is not serious social commentary but rather to offer as many jokes per page (and panel, and word balloon) as possible. While some will fly over the heads of the intended readership, it hardly matters given their extraordinary density. It’s notable that if manga is the reigning graphic format art style for young adults these days, the style for younger readers is quickly settling upon what is on display here—a lighthearted, animation-inspired use of cartoon figures, digital colors, and rough backgrounds—so that the transition from reading to television and back is becoming disturbingly seamless.
— Jesse Karp

Besides that 'disturbing' in there -- pretty darn lovely! I'll post more reviews as they exist. Scott Tingley of Comics in the Classroom did a 'sort of' review -- his daughter won't give him the book back yet, so he hasn't read it, but loves all the sea serpenty fun.

Here's a picture of my filing cabinet celebrating it's release: 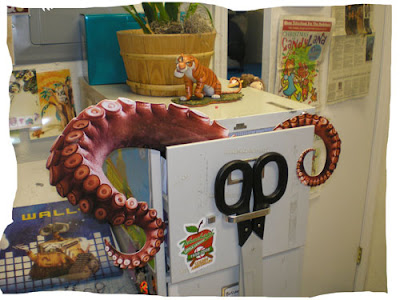 Did you KLC guys who also write this blog get a chance to see Cupcakes at the New York ComicCon? You were very nice and let me mail some for you to stick on the table, I hope you all snuck a copy for yourself. I included instructions that you could do so.

Gosh I'm a doofus, I haven't had a chance to even call any of you folks yet and see how the show all went for you guys. Can we expect som photographs on this here blog anytime soon? Mail them to me, I'll upload them for ya's. I'd like to help out the KLC anyway I can, and since flying to any of the eastcoast shows doesn't seem very likely at the moment, I'd love to handle a bit more web duties. We should have a meeting about that. When I get some time : )

I saw John Gallagher at the Miami Bookshow in November -- I should post some photos of that, and now here I am doing so:

Gosh, I only took one photo, and it's of me., Have I mentioned that I'm a doofus? 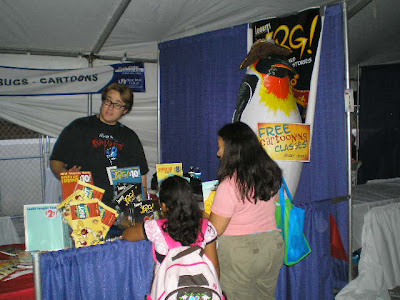 Has anyone here heard of 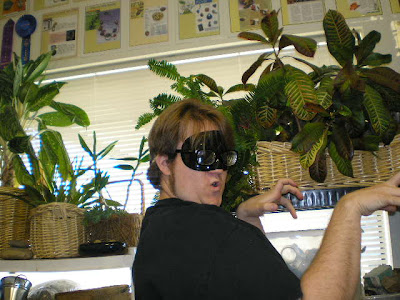 How's everybody doing finances wise? This stupid economy thing is getting everybody down, I'm sure, but nobody's in any dire trouble right? We all love comics to death, and I'm sure would be doing them even if it was impossible to make any money on them (just less often because of boring day jobs) but I really hope we can get everybody's demand and audience up into the stratosphere, so we can all concentrate on making tons more comics round the clock. That's the dream. Everybody loves entertainment, and Kids Love Comics, so I think if we can keep on keepin' on we'll be allright.


Did I also mention I'm now a kazoo virtuoso? And I've been wearing a zorro mask all day to see if anybody noticed -- hundreds of people looking at me strangely, but only one person actually asked. I decided to take it off before going in to the bank, I'm not totally stupid. Just about 20% stupid.
EDIT! >> Brian at www.Kidjutsu.com emailed me -- I got his link spelled wrong (how embarassing!) and he told me a little about referencing tags for the google bots to increase your page ranking. I've known that these exist and that I should be using them, but I haven't had the time to figure out how to do them properly. Brian gave me a few to changify here, so they should be working more groovfully. Expect me to know what I'm talking about more properly next time. I got contacted by a company that new all about these reference tags, and wanted to optimize me for alot of money, and while i was intrigued, I simply couldn't afford it. Expect me to get a book or two on the subject and acquire just enough knowledge to mess things up (my usual modus operendi)